Warehouse find! Hailing from Montreal, The Demon's Claws emerged from a healthy rock'n'roll scene that also gave the world the King Khan & BBQ Show, Les Sexareenos, The Sunday Sinners and a multitude of other like minded roots rock deconstructionists. The group was brought to the attention of In The Red by The Black Lips, who proclaimed, "The Demon's Claws are the best band we've seen on tour in the last year," an opinion to be taken very seriously as The Black Lips are on tour about 300 days a year and know their rock'n'roll better than most. The Canadians were signed immediately followingtheir first ever LA show. Part Gun Club, part Back From The Grave, part lo-fi distorted crunch, part young Mick Jagger with a mouth full of pills, they play with an "aw, fuggit" swagger, falling all over the beat then pulling it together before anyone gets hurt. Like flooring a V8 down a back road, they let the gravel fly but somehow always avoid the ditch. Inside this shiny gem you'll find glimpses of deserts and rattlesnakes, bits of blood and guts, some love and jerkin' off and even a couple of honest-to-god country songs. (In The Red) 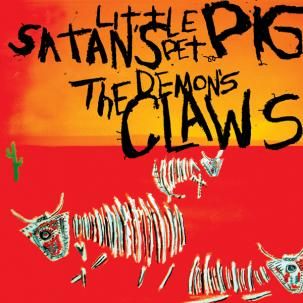