It's the newest latest from Bim Thomas' one man soul-punk bomb OBNOX, and Black Gladiator is psyched like a mug to be part of this expanding, dark dope cloud. This “Canabible Ohio” double 7” joint features five new tracks of dank punk stank with a level of pure b-boyism unfelt since the golden era of the Def Jam days. Dig “Deep In The Dusk (Redux)”* for the Jeep beat, replete with a broke ass MAGNETIX sample. Three of the four cover songs in this set represent the sordid history of Ohio rock and soul: GAUNT’s twisted “Flying,” KING JAMES VERSION’s “He’s Forever,” a tore up, one-in-a-million 60’s shouter which no one even knew about until the recent release of Numero Group’s Boddie Recordings box - a song which no other need attempt after this, and the all time MCCOYS classic “Hang On Sloopy” gets the ‘NOX treatment proper. A cover of the URINALS “I’m A Bug” rounds the set out, cuz we’re stupid like that. Records are housed in a full-color gatefold jacket in a limited edition of 500 copies. * “Deep In The Dusk (Redux)” to be featured on the upcoming “Corrupt Free Enterprise” double LP on 12XU. 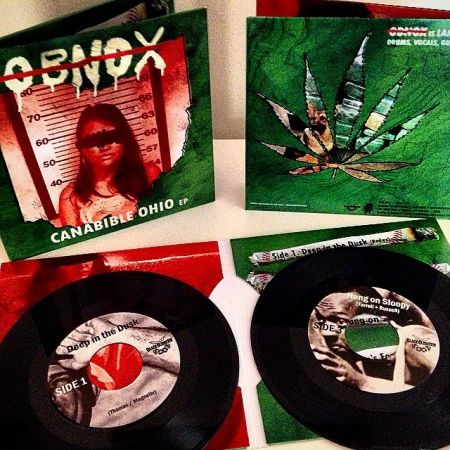