WHAT. It’s almost 2020!? Face it, the last ten years or so have been a BLUR—so much shit going down, good and bad—and a lot of music too. It doesn’t look like its gonna get any easier for ANYBODY to get their bearing, so TY SEGALL and Sea Note have gotten together a special box to help you reorient your head, no matter where you are. Yeah, this one’s for the freak, the fan, the head. Pig Man Lives is a stack of raw germs that were blown up in the world as Ty Segall releases over this last golden decade or so—specifically, the demos that bred Manipulator, Freedom’s Goblin, Emotional Mugger, Twins, Ty Segall, Slaughterhouse and Sleeper. Each finished record had its own unique aim and intention, but when you hear tracks from 2007 next to 2015, then 2012 cutting in after 2017, the splatter allows you to hear the continuum of a whole body of work exploding over and over again in the burst of freedom that comes with the initial sketch of a song. Non-linear reorientation, taking you back and forward over the course of eight sides and 47 songs. There’s even a few that haven’t seen the light of day before. You’re bound to feel different after you’ve spent any kind of quality time with Pig Man. Whether he’s recording alone at home or in a studio with the band, Ty’s goal in putting something on tape isn’t just to log the song, it’s to make a whole thing that’s rad. For some of these songs, further evolution brought even more out of them. And some are perfect this way, with rough edges and little details you’re not gonna believe you’ve lived without. As sure as Pig Man Lives, you won’t have to anymore. (Sea Note) 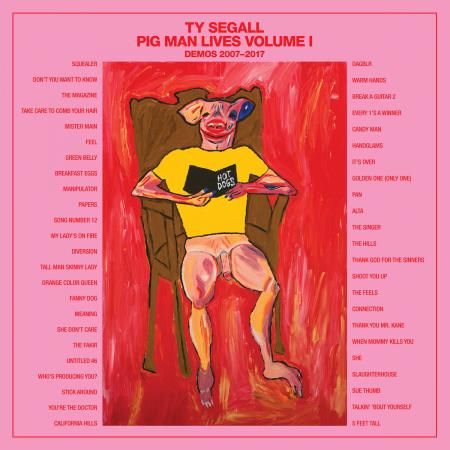