SILVER & GOLD VINYL REPRESSES!!SHANNON AND THE CLAMS return with a brand new album that tops everything they’ve done before. Sleep Talk features twelve new songs that Kim Fowley and Lou Christie would have clawed each others eyes out to get a hold of in the early ‘60s. Shannon can belt out fierce and fun like Wanda Jackson and Etta James going head to head in a competition for the last bottle of hooch in a song like "King of the Sea" and then play that heartbroken bad girl tryin’ to do good bit that hasn't been done this well since the Tammys or the Shangri-La's in a song like "Tired of Being Bad." CODY, the bands guitarist and other main song writer/singer comes on like a crooning, hiccuping, lo-fi garage version of the aformentioned Christie. Excercising the economy and aggression of Garage Rock in ways Lou would never have imagined but with a tenderness and vocal register you know he'd appreciate. Ian, the band's drummer, in addition to his skill at his own instrument provides additional back ups that would make Ennio Morricone and a tribe of head hunters equally as proud. Limited GOLD vinyl. (1-2-3-4 Go!) 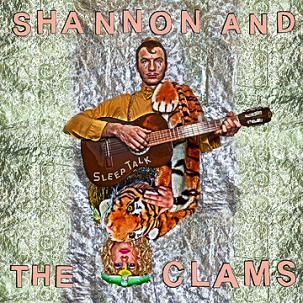