All tracks from the archive of Jaime Paul Lamb from tapes recorded between 1993 & 1999 in the USA.

Las Vegas in the 1990s was lousy with bars where you could shake your ass and make your ears bleed to live, screaming punk and garage band action on the reg: Cheater Slicks, Teengenerate, Necessary Evils, Oblivians and The Makers all came and conquered, and more wimpy 60s type combos than I care to remember rolled through every year. I was on the radio at KUNV Friday nights playing boss noise, and The Underground was the barely-scopic trash wax hut that was pushing dope onto a smattering of unruly but appreciative desert rats. The Double Down Saloon was one of the most attended venues, and it still festers in the dismal shadows of The Strip’s soul / money sucking hotel-casinos, justly earning its reputation as one of the USA’s most notorious piss houses. Third generation VHS midget porn lit up the TV sets, snail trails from a thousand off-duty strippers encrusted the bar’s kiddie horse ride, who-knows-what kinds of cooties multiplied in the sofa... I even heard a story about a guy who had spent over 100 straight hours there walking around with a tissue up his nose to keep the blood from leaking on his jacket, and eventually shooting someone.

There was a fair amount of local bill-fitting bands that rocked the house including The Latest Flames (Fireworks / ‘68 Comeback / ‘Blivs inspired scree), veteran Vegas wiseacres The Vermin, and The Real Creeps, who were so greasy they made you itch. At decade’s end, a group of transients called The Dirty Babies, led by Jaime Paul Lamb, made their entree and fully totalled shit for a few months with a caustic Pagans-inspired pummel that covered a crack we were sorely missing. No one seemed to know from under which manhole they lurked, but they duly got injected into the set.

Lamb had arrived from a junk-fueled decade crossing America in search of sobriety and friends to form instigating bands with. As a Connecticut teenager in the late 80s he picked up on the Psychedelic Moods compilations, and a friend passed him the Velvets’ “White Light / White Heat” album. Back From The Grave, Pebbles and Killed By Death compilations were the next obsession, but as often times happens, a serious rock’n’roll addiction begets slavery to rock’n’roll enhancing vices. Jaime had landed himself in a drug treatment facility in New York, and eventually a halfway house in Phoenix, AZ in the early 90s.

Slumming it in the desert, bunking with a Yamaha MT50 4-track tape recorder and working in a car wash, he met a set who would eventually become Dismalt, The Crawlers, Heck Yeahs, The Lumps and Mid City Nuisance: the filthy consistency between these projects is highly suspect.

Jaime hit Houston, TX next, and the move birthed The Rosebuds, The People's Court and Mega & the Nyrdz (“Rip Your Cunt” is the best song The Spits never copped, and “I Lurk” is unintentional Crime slime). Mega (Nyrdz leader) and Lamb split to Mega’s hometown of Huntington Beach, CA and started a new line-up of The Crawlers, founded The Drop Outs and joined pro skater Riky Barnes' band Riky & the Buttz. Living in a punk house full of junkies was too much for a recovering addict to handle, and Jaime scored himself a case of the most unhip Hep C - a result of sharing needles due to Orange County’s lack of a needle exchange program.

Trying to kick the habit (again), he returned to Phoenix and started Pacific Northwest styled 60s R&B punk outfit Van Buren Wheels. Locals were picking up on the sound, and the Wheels were voted Best Band in PHX by the alt weekly rag. But the devil heroin once again proved to be stronger than everyone’s artistic drive. Friends started dying, and the Van Buren Wheels imploded. Around that same time ('97 - '99) Jaime was occupying himself with other, shall we say, more “exotic” musical projects when other unknown degenerate factions began to creep up: Barf Bags, Magister Ludi (“We’re Loud” was recorded by Jaime), Pink Fingers and The Winners all appear here and further the agenda. Jaime split to Vegas again, formed Les Fleur du Mal (they never played live), and then he was back in Arizona.

This album compiles the most sordid musical moments of the better part of a decade in the life of a perverted and productive cat. It needs to be noted that of all the tapes in this collection, none of them were ever sent to labels in hopes of getting a record made. They were recorded and dubbed and given to a few friends, and that’s it. You can find the current works of Jaime Paul Lamb at jaimepaullamb.bandcamp.com, where his experiments in Masonic free jazz skronk, occult garage funk and Mexican ranchero beats exist for the fuck of it. - “Bazooka” Joe Almeida Dallastown, Pennsylvania, USA, 2015 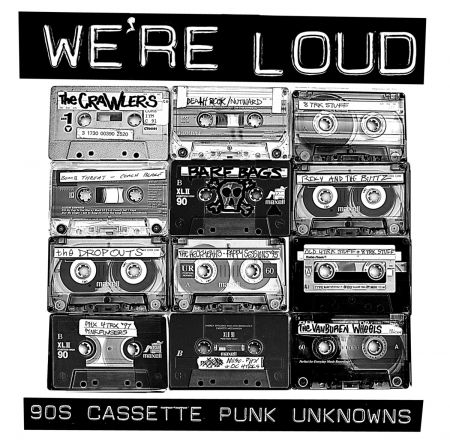