SKU
D RER106
$23.50
The hard stuff saga continues with Brown Acid - The Eighth Trip! Yet again, Riding Easy has searched high and low to bring ten tracks of straight blue flame fire from the golden age of heaviness. As usual, these rare tracks have been carefully curated, analogically sourced, and fully licensed so one can listen guilt-free and save a lot of time and money tracking down the original copies. This Trip comes straight at ya with an all out attack, quite literally—Attack’s “School Daze” kicks out the jams Detroit-style. White Rock will knock your stank-ass socks off with their 1972 burner “Please Don’t Run Away”. This 45 was privately released by this Houston-based band that reportedly played shows with Josefus, Stone Axe, and Purple Sun. Riverside’s two-sider from 1974 rips from front to back. It’s also exclusively available here and is virtually unknown. And that’s just some of the stellar collection of rare singles featured here. Some of the best thrills of the Internet music revolution is the ability to find extremely rare music with great ease. But even with such vast archives to draw from, quite a lot of great songs have gone undiscovered for nearly half a century—particularly in certain genres. Previously, only the most extremely dedicated and passionate record collectors had the stamina and prowess to hunt down long forgotten wonders in dusty record bins—often hoarding them in private collections, or selling at ridiculous collector’s prices. Legendary compilations like Nuggets, Pebbles, ad nauseum, have exhausted the mines of early garage rock and proto-punk, keeping alive a large cross-section of underground ephemera. However, few have delved into and expertly archived the wealth of proto-metal, pre-stoner rock tracks collected on Brown Acid. (Riding Easy)
[D RER106] VARIOUS ARTISTS "Brown Acid - The Eighth Trip" LP
Skip to the end of the images gallery 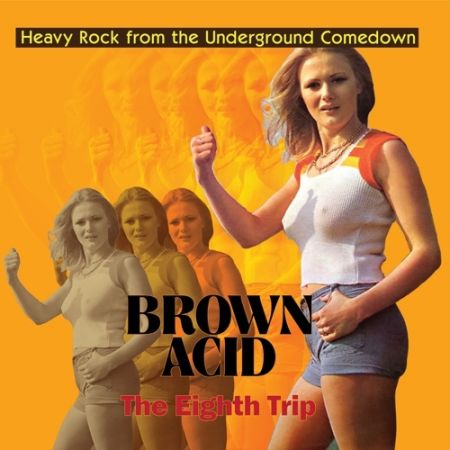