SKU
D EZR096
$23.50
Pegasus recorded one single in Baltimore in 1972 and they made it count. “The Sorcerer” is a throbbing ripper that prior to this was basically unknown. The track title for the Nobody’s Children single and start thinking, oh no, Riding Easy given up on bad trips. Fret not, “Good Times” was originally written as a joke. The song has since been bootlegged numerous times and even covered by the Butthole Surfers, but this is the first time it’s been fully licensed. This latest volume continues with many more boneheaded bangers, crunchy jams, and incredibly damaged heavy slabs. The closer on the Seventh Trip is one the label holds very near and dear. Not only is this record the one that’s taken the longest to secure the rights to, it’s also one of the very best examples of heavy psych ever heard. “The Darkness” was recorded in a basement studio in Kansas City in 1969 when the lead guitarist was only 16. The band was from a rural Missouri town, played only one impromptu gig in Clinton, and pressed only 125 copies of this, their only single. It should come as no surprise that it sells for hundreds of dollars when it’s offered. That’s a small price to pay for such greatness. (Riding Easy)
[D EZR096] VARIOUS ARTISTS "Brown Acid: The Seventh Trip" LP
Skip to the end of the images gallery 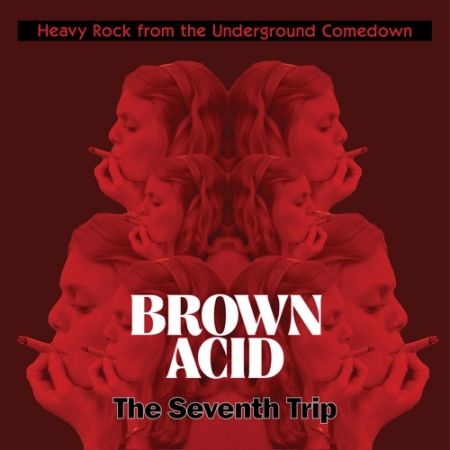