SKU
D EZR090
$23.50
Six volumes worth of licensed tracks released in just three years: doing the Dark Lord’s work isn’t an easy job, but somebody’s gotta do it, so here is Brown Acid - The Sixth Trip, with more lined up. The heads just can’t get enough obscure hard rock, heavy psych, and proto-metal from the late‘60s and ‘70s! This time around Riding Easy present ten deep cuts from across the continental USA and one from the neighbors up North. This trip kicks off with an outrageous number from Gold out of San Francisco circa 1970. The band used to open their sets with this over-the-top frantic jammer which is absolutely mind-blowing! Delving deeper into the depths, Canadians continue to prove that they could bang heads with the best of ‘em! Heat Exchange from Toronto released the rollicking ripper “Inferno” on the Yorkville label way back in 1968 and it’s still thumping almost fifty years later. Some more examples of the mind-melting tracks on this platter: Missouri isn’t a state that brought us a lot of heavy 45s, but there are a handful of outstanding tracks, one of which is the funk-laced anthem “Give Me Time” by Backwood Memory from Kansas City. Youngstown, Ohio, meanwhile, might have been the Hard Rock Mecca back in the day. Travis is yet another Youngstown group that aimed to get asses out of seats and out in the streets. Truth & Janey had their incredible proto-metal masterpiece 1976 album No Rest For The Wicked; released four years earlier, “Midnight Horseman” was a 45-only track, included here! Red vinyl. (Riding Easy)
[D EZR090] VARIOUS ARTISTS "Brown Acid: The Sixth Trip" (RED vinyl) LP
Skip to the end of the images gallery 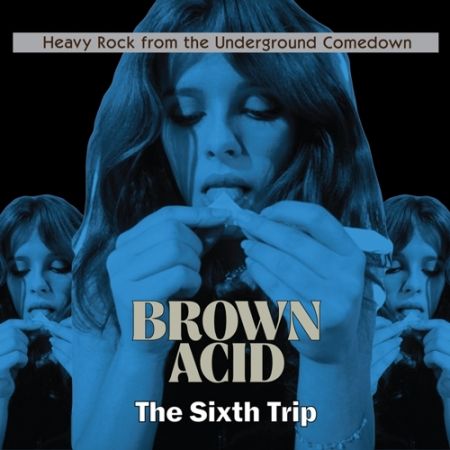