Choke Chains is the blurred visions of a black out drunk alien abductee set to the sounds of noisy ass elastic guitars, filthy fuzzed out bass, and the drums of chaos.
The secret history of punk rock full of many half-truths and outright lies, but is clear about this: the heart of punk rock lies in the Midwestern United States, and the heart of Midwestern Punk Rock is in Michigan. No one knows for sure why that mitten-shaped state is as important to punk rock as it is, but there are many theories: the harsh winters, rebellion against the overbearing, puritanical Dutch who’ve infested much of the state, or just growing up surrounded by water and rust. The reasons are not important. All you need to know is that it was there, in the beginning, where the Stooges crawled out of the primordial ooze of white bucks and sock hops to bring forth a new world. A better, dirtier world, and it is this new world that spawned Choke Chains.
Choke Chains are purveyors of a brutally hilarious brand of rock and roll. They are not wet-behind-the-ears hipsters playing spot the influence, but are instead battle-scarred, somewhat worse-for-the-wear veterans clearly, if not exactly cleanly, expressing their rage and frustration. They may be angrier than you, but that’s only because they’re smarter too. And funnier. They are a mugger who makes you laugh. Choke Chains produce a sound and fury signifying killer hooks and a jet black sense of humor.
Coalescing around legendary Michigan scene-maker, Thomas Jackson Potter (he of Bantam Rooster and the Dirtbombs, among many others), this literal band of misfits is made up of members from other Midwestern powerhouses like the Chinese Millionaires, No Bails, Blank Schatz, and more. They are important not because they are pushing any boundaries, but because they are pushing buttons. Because they speak truth to the powerless. Because they don’t take anything, especially themselves too seriously. They are the breath of foul-smelling air that reminds you that you’re alive.
You need Choke Chains much more than they need you. 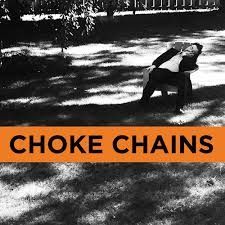