Electric Mess LP Falling Off theFace of the Earth

SKU
D GROO 036LP
Be the first to review this product
€ 14,50
Since forming in 2007, The Electric Mess have developed into an exciting and tight rock n' roll band, led by an androgynous and dynamic lead singer, Chip Fontaine (aka Esther Crow). Their self-titled debut album, featuring the songs "You've Become a Witch," "Trash Talkin' Woman," and "She Has a Funny Walk," received excellent reviews and made numerous "Best of 2010" lists. All 13 of its tracks have been heard on U.S. and international radio stations. Shindig! said: "There are a wide range of influences, including British Invasion, 60's garage, R&B, and psych,but it sure ain't a mess...a very tight unit with bunch of strong tunes possessing a fine, melodic edge." Like their debut album, "Falling Off the Face of the Earth" was recorded at The Church in Brooklyn, engineered and mixed by David Horowitz (The Above), and mastered by punk legend Ivan Julian (Richard Hell and the Voidoids). 10 of its 13 have already been heard on radio stations across the U.S. and in Japan, France, Scotland, and Germany. "...ear-piercing Farfisa, raucous guitars, driving rhythms and sneering vocals... echoing the surge of original punk that rocked a thousand suburban basements.... Great original songs, blazing guitar riffs with neo-psych shades." (Hyperbolium) "Thirteen songs that move through the garage punk label perfectly... a band that makes a wall of 60's sound with total conviction." (Kick Out the Jams) "...uncompromising and unpretentious sounds of the great garage bands of the 60s... songs that catch fire right out of the gate and conjure images of The Yardbirds, the 13th Floor Elevators, The Stooges, and at times, even early Stones." (Burning Wood) www.theelectricmess.com
[ NL GROO 036LP ] Electric Mess LP Falling Off theFace of the Earth
Skip to the end of the images gallery 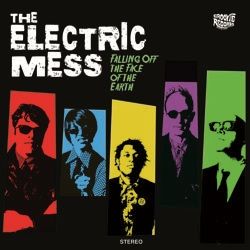