Slovenly Recordings celebrates its 10th Anniversary this year with a gaping hole surrounded by 10 black inches of rock hard pigfuck manliness via “New In Class” by GAY ANNIVERSARY! This Greek crew (feat. members of label mates BAZOOKA) screws a nervous fucking wreck of hyper-speed BIG BLACK / RAPEMAN style violent blur right into your eyeballs, like Robocop’s helmet shoved up Clarence Boddicker’s pee hole. You’ll be paranoid, looking out your windows to make sure the world isn’t crumbling around you while the the jackhammer drum machine pounds away at your face and guitars scream and slash through your brain on these 8 twisted tracks. Play loud and try not to scratch yourself too much. This sound hurts bad enough. STREET DATE 5/29/12. 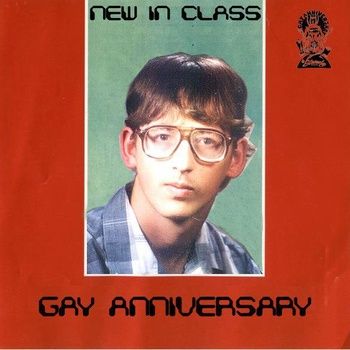