HECTOR - Demolition (The Wired Up World Of Hector) LP

HECTOR - Demolition (The Wired Up World Of Hector) LP

Never-before-heard unreleased junkshop glam gold dust from the genre's No. 1 band. Portsmouth's Hector are widely regarded as the very best of the junkshop glam rock bands introduced to us in the early 2000s by the RPM's lipsmackin' '70s CD series. Recently discovered archive analogue tape recordings found in the attic of frontman Phil Brown form this unique LP. The band's original DJM singles together with 'Demolition', an unreleased third single, join forces with outtakes, demos, live and rehearsal recordings to make this release an unmissable opportunity for glam rock fans worldwide to hear more from the band whose anthem 'Wired Up' has been adopted as a battle cry by a new audience of fans with books, fanzines, radio shows and club nights proudly named after it. Hector's 'Wired Up' was released in 1973. It had all the ingredients of a hit single. It should have topped the charts and launched a spectacular career for the band. In a fair world, the name Hector would be mentioned alongside bands like Sweet and Slade. Unfortunately, timing and luck weren't on their side. The product was there, the press coverage was there, the Radio 1 airplay (which was everything back then) wasn't and the kids that did hear it must have been deaf, dumb and blind. The plug was finally pulled in 1975 after their second single 'Bye Bye Bad Days', another poky punch of proto punk dressed up in a velvet glove, also failed to become a heavy-hitter. 'Demolition - The Wired Up World Of Hector' is not a phoenix from the ashes. It is Pompey* from Pompeii. Tunes from the ruins. Glamour in amber; perfectly preserved. A second chance to make a first impression. Hector are back! Are you watching and listening? Comes in die-cut gatefold sleeve with full colour double sided poster insert with unpublished photos provided by the band and liner notes. Fully remastered at UFO Hi-Fi Studios (home of the Italian glamsters Giuda). 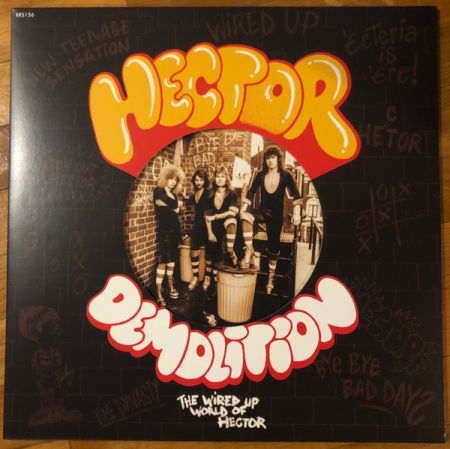