SKU
82EP
Be the first to review this product
€ 7,35
Ex-squeeze our French, but what the fuck is this retarded shit? Slovenly subsidiary "I Shit In The Milk" Records has gone off the deep end with a 45 by Wau y los Arrrghs!!! frontman Juanito, who is, get this... BEATBOXING LIVE in front of a crowd of incredibly abnormal European psychopaths. Imagine Biz Markie or better yet, Rahzel covering The Sonics at a farm animal orgy and you're barely getting the picture. Sen~or Wau has has been spewing forth this wretched racket for years, and despite many instances of it being caught on tape, this is the first time it has ever been laid to wax! A tasty treat here for fans of beatboxing, Wau y los Arrrghs!!! and spastic sounds in general. God help us. Limited to 500, white vinyl.
[702-82] JUANITO WAU! One Mouth Band 7in
Skip to the end of the images gallery 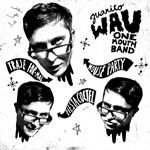