PLEASE NOTE, THAT ALL THE COPIES RECIEVED HAVE A HAIRLINE CREASE ON ONE OF THE CORNERS. THE RECORD IS NEW AND SEALED BUT THAT SMALL DAMAGED HAPPENED DURING TRANSPORTATION.

On Confines of Life, the third studio album from California punk band Neighborhood Brats, the band dives head-first into songs about environmental crisis, systemic oppression, interpersonal/intrapersonal conflict, and the trappings of modern existence. Following blueprints of ‘77 punk, ‘80s hardcore and elements of post-punk, the diverse songwriting influences of vocalist Jenny Angelillo and guitarist George Rager are showcased throughout, putting the band in their element, while expanding on their original concept.

Recorded in February and March 2020 at Station House studio with Grammy Award-winning producer/engineer Mark Rains, the band had barely finished production when Los Angeles went into its initial shutdown in response to the incoming pandemic. Multiple 2020 tours were subsequently canceled as the music industry, and life in general, came to a standstill. 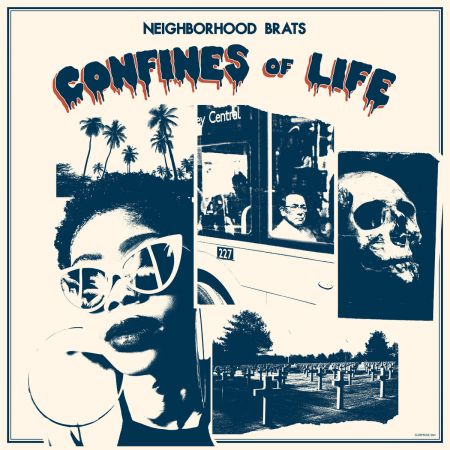