PHONE JERKS are a foursome from Moncton, New Brunswick. This is raw crab-shrapnel-Canada! Three dudes and Emily on drums, all on lead vocals means technically a dial-up connection from the ice speedway smash up derby to budget rock heaven. If you remember BRENTWOODS and LOLI & CHONES you´re should bet on her, the boys crank it more in a wired METROS way to winter dance party SPACESHITS with some euro teen degenrate REAL LOSERS spikes. Yes, this reference list from the all late 90´s to millenium band league which did NOT suck. You need to look very close today to find this shower of frequencies, blown-out fidelity lo-fi rock combined with flying-ice-cream-cups-fun. Take RADIOACTIVITY, SICK THOUGHTS, REATARDS and TOTAL PUNK pilgrims, with more buckets of simple & stupid party collusion and you be catapulted back to the bands above you may have not grown-up by then. It´s lo-fi garage punk! You´re lost in a infinite time-loop! PHONE JERKS had 2017 a 45 "Can´t Stand the Maritimes" on GOODBYE BOOZY (the Italian who never did anything else in life expect what he does best) which sold out quick, but pheew, the album blows the single away. Recorded by Dave Belliveau (DISASTERBATERS) nad mixed & mastered by James O'Toole of OUTTACONTROLLER - it´s so good you don´t need to fake orgasms here. Ripping covers of "Violence, Anarchy, Baby, Mother, Daddy-O, Dig" by DA SLYME and "Revolution" by X. We are writing 2018 and we started 1998, this is the blueprint and the easiest shooting-fish-in-the barrel of an autobiographical ALIEN SNATCH! release. We would have released this PHONE JERKS LP any year of out label history, but where have they been the last twenty years? If Greg Lowery would run RIP OFF Records instead of real estates, this would be his condo of choice! Their power pop origin and band name phone schtick is highly reminiscent to ring-ring BUSY SIGNALS to MARK SULTAN´s BBQ taking a message to hang BLONDIE after the beep. Get this record and reaffirm your life choices!

[DW SNATCH!089] PHONE JERKS - Self Titled LP
Skip to the end of the images gallery 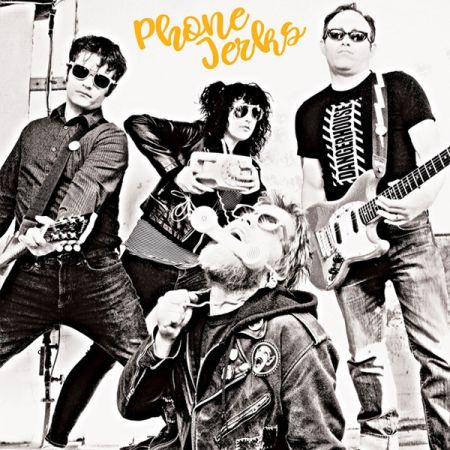