The HEX DISPENSER return with a new album packed with their hypnotic darkness rock!. Their previous releases got terrific feedback, they´re largely considered as the iconic band of angst ridden, raw haunted garage punk The shadow-y tension-filled voice of Alex Cuervo is absolutely remarkable and makes any of their song an easy go at yer music jeopardy. The HEX DISPENSERS give you the creeps with killer down-toned guitars and paranormal pop hooks as if RAMONES would have only played bat caves, the SPITS got stuck in black java and DEVO felt the cold touch of the MISFITS. They took all their latest singles hits and brand new songs into the Cool Devices Studio of Mark Ryan / Jeff Burke (MARKED MEN, RADIOACTIVITY) to record album "III". You get the most rocking HEX DISPENSERS album to date, a bass driven catacomb exploration with some winks of Alex' solo works and a doom-ish, sinister synth track "Hypersleep" - sung by Alyse and Rebecca. Brilliant artwork and inner sleeve by the band itself. Mastered by Mikey Young (EDDY CURRENT SUPPRESSION RING). 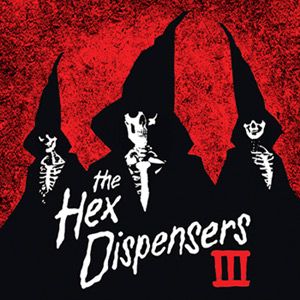