LAME is a blues lo-fi punk three-piece from Torino, Italy featuring Massimo Scocca from 90's Italian garage bands CAVE DOGS and TWO BO's MANIACS, Colombian drummer Maria Mallol Moya and Stefano Isaia of MOVIE STAR JUNKIES.
Follow them to the den of iniquity, where Satan tells you bugs, goats and witches how to obey, be the speaking choir to the DWARVES intoning DEAD MOON! Cut this on a record! Jump between folk pop heaven and garage hell! It´s the dark, thick blood that is meant to put out the hellfire blaze. A weird mix of noise punk madness, lonely ballads, country sickness and stomping blues. "The lame shall enter first" is named and illustrated after the 60´s American essayist Flannery O´Connor and one of her shorts stories. Cover art by Tim Kerr of MONKEYWRENCH and JACK O' FIRE fame. Mastering done by Crypt recs. head honcho Tim Warren! Fans of GORIES, an on the other side of the street PUSSY GALORE / HUNCHES rip out a big part of your bible and eat the pages, wait at the gates, the LAME shall enter first! 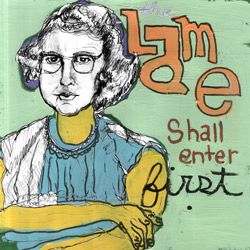